Night of the Owls, sometimes referred to as Court of Owls or City of Owls is the first Bat-family crossover of the new 52 and the second chronologically after Zero Year. which started almost immediately when it started in 2012. Night of the Owls plot line surrounds an ancient family who have operated in the shadows in Gotham City for many years and feel now is the time to strike against the Bat family and take over Gotham for good. The main plot line belongs to Batman much like the next crossover arc – Death of the Family.

Night of the Owls arc

Night of the Owls crossover uses issues from Batman, Nightwing, Catwoman, Red Hood and the Outlaws, Batman & Robin, Batgirl, Detective Comics, Birds of Prey and The Dark Knight. Night of the Owls began as single issues in April 2012 and lasted until May 2012. The plot line as given away by the title all occurs during the same night which makes it a fairly short crossover that’s an easy way to get people into DC Comics in our opinion. There’s more than one way to collect Night of the Owls and we’ve got a few options for you.

Please bare in mind the issue numbers relate to New 52 only.

The full, chronological reading order for Night of the Owls is as follows:

Build up – The Court of Owls

Night of the Owls

To get this complete would mean buying individual issues which could be time consuming and costly. However, with this option you can read it in the order it happened in the storyline itself with ease. In total, including the Court of Owls prologue there are 21 issues. Batman has 10, Red Hood and the Outlaws has 2, Batwing has 1, Batman & Robin has 1, Batgirl has 1, Nightwing has 2, Detective Comics has 1, The Dark Knight has 1, Birds of Prey has 1 and Catwoman has 1.

Night of the Owls and Death of the Family Box Set

The second option, if you also want to read Death of the Family is this box set: 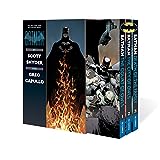 If you just want the Batman experience then purchasing The Court of Owls and City of Owls is the option for you.

Luckily, as Night of Owls is a fairly straightforward crossover it doesn’t take much effort to get them altogether to enjoy them. We highly recommend it as it is a phenomenal storyline.